Spring Sale – 25% off all orders placed till 31st May – Use Code MAY22
Latest News | Shower and Shower Room Terminology… What does it all mean?

Shower and Shower Room Terminology… What does it all mean? 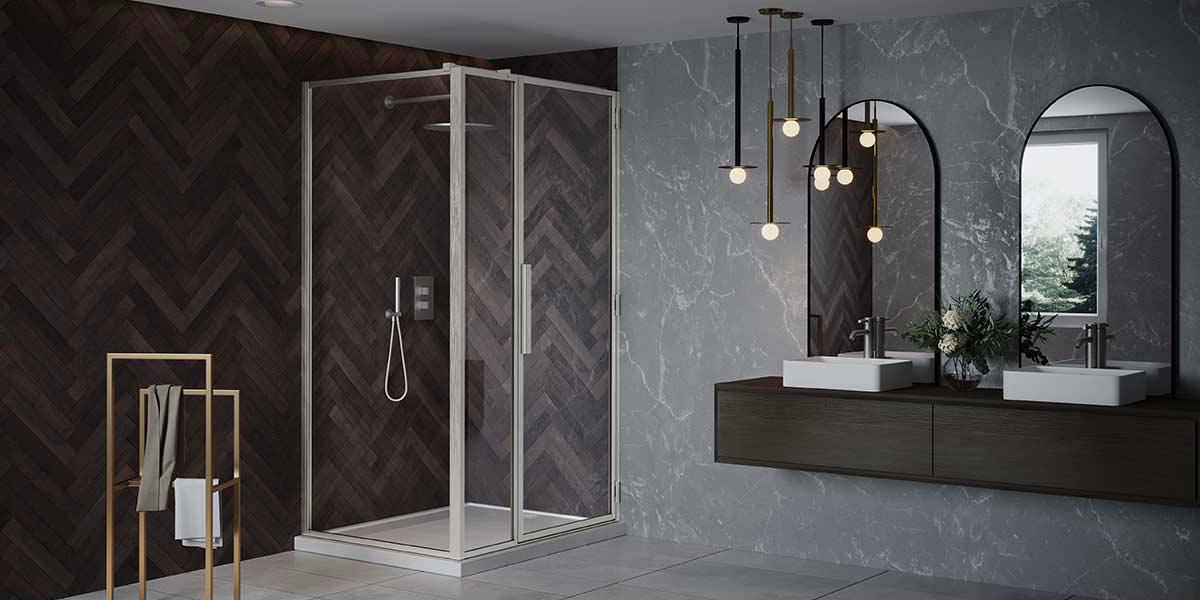 If you’re looking for a new shower solution then you may well be visiting bathroom showrooms or completing some research online to see what your options are.

By the time your shower installation is complete, you’ll most likely be an expert, however, at the start of the journey, you may find yourself overwhelmed with all of the jargon! I mean what exactly is a walk-in shower? and how is this different from a shower enclosure? And what is the ‘waste’?

At A Touch of Glass, we want you to feel completely comfortable asking questions and allowing us to use our experience and expertise in custom shower solutions and bathrooms to advise you about the many options that are available to you and to explain to you exactly what they mean.

This guide aims to help you gain a better understanding of the bathroom and shower products out there to include the main product offering, but also some of the smaller components and shower room accessories.

What is a walk-in shower?

Walk-in showers are stylish, streamline in design and add a touch of luxury to any bathroom. They make good use of space and offer a luxurious and spacious showering experience with their simple door free design.

Essentially, a walk-in shower is a shower enclosure that doesn’t have a door. Although in many cases a walk-in shower still has a shower tray, this is often low profile, allowing the bather to simply walk-in, as the name suggests. There is no ‘step up’ to gain access to the shower area and no shower door to contend with. Walk-in showers tend to be more spacious and make your bathroom space appear more streamlined. They are typically simple in design, constructed using frameless, toughened glass panels, or panels with a very minimal frame. Walk-in showers can be any shape, although commonly rectangular or square and they often include a drying area which means you can towel dry in a warm environment and avoid dripping water on the bathroom floor.

What is the difference between a walk-in shower and a shower enclosure?

What is a shower enclosure?

A shower enclosure is a shower area that is enclosed with one or more panels, a shower door, and sometimes incorporates one or more bathroom walls. A shower enclosure can be fitted in most positions in a room, subject to plumbing, and there are lots of different shower enclosure styles and configurations. Shower enclosures can be framed or frameless, both made from toughened safety glass, with the frameless variety using metal hinges for the door. Frame styles vary with the most stylish being slim metal frames in a variety of brushed metal or black finishes.

How is a shower cubicle different from a shower enclosure or a walk-in shower?

What is a wetroom?

A wet room is an open plan shower experience. The shower area is the same level as the rest of the floor and there is no shower tray, panels, or doors. A wet room is waterproofed or ‘tanked’ room, by this, we mean that the walls and floor are sealed to make them waterproof and prevent any water from escaping. The floor is sloped which guides any water towards a drain or waste.

What is a custom shower solution?

A custom shower solution means that the shower has been designed specifically by you, often with the help of a bathroom designer or custom shower specialist. YOur bespoke shower solution is designed to meet your needs and to fit your space perfectly. It is not an ‘off-the shelf’ shower enclosure, it is bespoke, designed, and manufactured to your specific requirements using the materials of your choice.

What is meant by ‘hardware’?

What is a bespoke shower door / cubicle?

This really falls under the remit of a custom shower solution. If you want something specific, or unique, something that’s not available ‘off the shelf’, or if you are working with an unusual space then often a bespoke shower solution is the answer. A bespoke shower means you can choose exactly what you like and have it manufactured and installed to your chosen specification. Bespoke showers also work well when you have the opportunity to create something really incredible, for example, if you have a lot of space, want to create a luxury hotel/spa style bathroom retreat or you are simply looking for something that is that little bit different.

What is a shower panel?

The term shower panel can be used in more than one way depending on the context. A shower panel is a term often used for a single waterproof wall panel often used as an alternative to tiling within your shower area or bathroom.

When using the term shower panel in relation to a shower enclosure, shower cubicle, or walk-in shower this means one of the glass panels which form the enclosure. The show panel could be either a framed or frameless shower panel.

What is a Return panel?

A shower return panel is often referred to as an ‘end panel’ or a ‘side panel’. It is a glass panel that provides a ‘return’ to either a wall or another panel forming part of an enclosure or in the case of a walk-in shower, it could be an end panel positioned to help reduce shower spray.

What is a slim framed or low profile shower screen?

This refers to framed shower panels, screens, or doors where the width of the frame is minimal and narrow. Less frame, more glass but without going as far as frameless! A shower that has slim brushed metal or matt black frames adds style and definition to your shower room that is perhaps not always achieved with a frameless shower solution. A slim shower frame in black or a metal finish is very on-trend for the shower industry at present.

What does it mean when it says ‘outwards opening’?

This refers to the direction in which the shower door opens or pivots from its hinge. When a shower door is ‘outwards opening’ the door will open towards you when you are stood on the outside of the shower area.

What does it mean when it says ‘inwards opening’?

What is a Shower Support Bar?

This is a reinforcement bar that provides your shower screen with extra support. Shower support bars are often provided to match the frames of your shower or your shower set.

What does ‘hinged to the wall’ mean?

What does hinged to inline panel mean?

What is a side panel?

A side panel is another word for a shower panel or a shower return panel. Various panels make up the components of walk-in showers, shower enclosures, and shower cubicles. Side panels are available in various sizes, particularly when you are designing a bespoke shower.

What is a shower frame finish?

What is fluted glass?

Fluted glass has vertical grooves. It is sometimes referred to as ‘textured glass’ or ‘ribbed’. The fluted glass used by reputable shower manufacturers and suppliers will still meet safety standards and is a popular alternative to clear glass or laminated glass. Fluted glass is one of the latest interior design trends as it adds texture and detail whilst maintaining light. It is especially suited to bathrooms because as well as adding elegance, it also provides a degree of privacy, whilst still allowing some visibility and light. When paired with brushed metal frames, fluted glass creates an up to the minute style choice.

What is a Shower Set?

A shower set is a collection of shower products often comprising of a showerhead, shower valve, and a shower rail. Different shower sets will have different items bundled together. Buying a shower set simplifies buying a shower and often saves money.

What is a Shower Ceiling Arm?

A ‘Ceiling Arm’ means that your shower is fixed to the ceiling rather than the wall. The length of the ceiling arm can be adjusted so you can choose the right height for your shower. Ceiling arms come in many different designs, shapes, and finishes.

What is a Shower Wall Arm?

A ‘Wall Arm’ means your shower is wall-mounted. Wall arm options come in different sizes and are available in many different designs, shapes, and finishes.

What does WRAS Approved mean?

‘WRAS Approved’ stands for Water Regulations Advisory Scheme. WRAS Approved is a certification mark that demonstrates that an item complies with the high standards set out by water regulations and that a product is of suitable quality and standard.

What is a Shower Rose?

A ‘shower waste’ is where your wastewater drains away. It’s where the shower water disappears to thus emptying your shower tray. A shower waste usually comes with a removable grid for easy cleaning and maintenance. Shower wastes come in many different designs, shapes, and finishes.

What is a Shower Valve?

A Shower Valve is used to control the flow of water and often the temperature of the water. There are different kinds of shower valves and shower valves can either have 1 outlet, used perhaps to control an overhead shower, 2 outlets which could be used to also direct water to a handheld or wall mounted shower, or 3 outlets which may have the option of directing water to body jets. A concealed shower valve is a valve that is concealed behind the tiling in your shower with just the plate and handles visible, meaning all pipework is out of sight.

Shower valves, even concealed shower valves are often chosen to match other shower components such as showerheads, shower rails, and shower frames.

What is a Shower Tray?